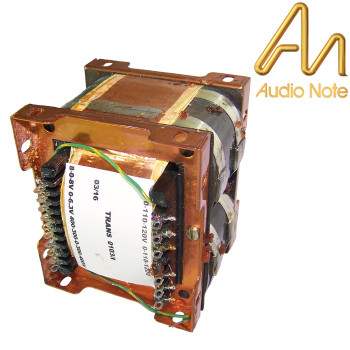 Over the years starting from the very first Audio Note amplifier and pre-amplifier kits back in the 90s, their stock mains transformers have been incredibly popular. Ideally suited to the home constructor making up a valve pre-amplifier or phono stage due to the versatility of the secondary windings and their rugged build and top performance. Or building up the famous 300B SE stereo amplifier Kit, the Kit 1. The standard TRANS-0103 (pre-amplifier) and the TRANS-013 (Kit 1) are both E&I core material.

To quote Andy Grove, Audio Note's esteemed designer - Our economy transformers (E&I) use a material known as M6, in laminations of 0.35mm thickness. The material is first cold rolled, to align the grain structure, into a tape then it is punched into laminations. The problem with this is that the flux runs anti-parallel to the preferred direction at the back of the "E". This means that at that point the materials full potential is not realized at that point increasing losses and decreasing effective permeability. M6 steel has reasonably low hysteresis, good permeability (approximately 10,000) and high saturation flux density (approximately 2T or 20,000 Gauss). The problem of poor grain orientation is alleviated if we move from I-E laminations to a C-Core. Here the metal tape, after being cold rolled, is wound into a loop and then cut, now the magnetic flux always travels in the preferred direction in the steel, this alone gives a significant increase in performance. When we move up to a C-Core we change the material's specifications to M0 or HiB silicon steel a material that has slightly lower losses and higher permeability than M6, the permeability of HiB can be 40,000 or more. HiB is processed in a different way to M6 giving it a different grain structure this special material is manufactured in Japan and America only. Our finest transformers use two versions of Radiometal core in the form of a C-Core. Radiometal is a 36% Nickel iron and Superradiometal a 48% Nickel-iron alloy of excellent magnetic properties the permeability is similar to that of HiB but its saturation flux density is lower at 1.6T or 16000 Gauss. Radiometal has a much lower hysteresis loss than silicon steel and is far more sensitive to small signals. If one is to firstly listen to a transformer with the best silicon steel core and then change to one with the Radiometal core, one experiences more colours and texture in the performance and more low-level details are present. The high frequencies are so much clearer. It is like the difference between artificial light and sunlight.

So we now have the first level of double C-core, the IHiB available for the TRANS-0103, referred to the TRANS-0103-I. The IHiB version of the TRANS-031 is to follow shortly for all those Kit 1 owners.

PS. Don't be put off by the rather random placement of the red resin of the TRANS-0103-I. Once the transformers are put together they are soaked in a vat of resin at the Audio Note factory for 24 hours to further reduce any possible wire vibration.