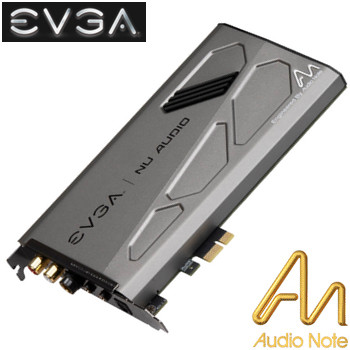 For nearly 20 years, EVGA has built the most powerful graphics cards to play your games at the highest settings, powerful motherboards to run your system at optimal settings, and reliably efficient power supplies to power your system. Now, EVGA extends its enthusiast tradition by partnering with Audio Note (UK), Ltd. to provide the most immersive audio and lifelike gaming experienced on a PC with EVGA NU Audio Card.

For the D/A conversion, there are pair of oscillators (one each for 44.1kHz and 48kHz families) clock an XMOS chip’s output into an AKM AK4493 decoder chip (PCM up to 32bit/384kHz and DSD256) which in turn feeds the card’s analogue output stage: an ADI AD8056 op-amp spills via a pair of RCA sockets and is fully rollable.

Rollable too is the ADI OPA275 dual op-amp that forms the backbone of the 6.4mm (variable) headphone output that offers an output impedance <1 Ohm. It’s reportedly good for headphones rated between 16 Ohms and 600 Ohms.

For the volume control, EVGA’s own software interfaces with the NU Audio Card’s Maxim DS1882 controller for fully analogue attenuation. A TOSLINK output is there for those wishing to feed into an external DAC, though it would have to be rather good to beat this one.

So if you listen to a lot of music using a computer or you are a hi-end gamer this is the sound card for you.