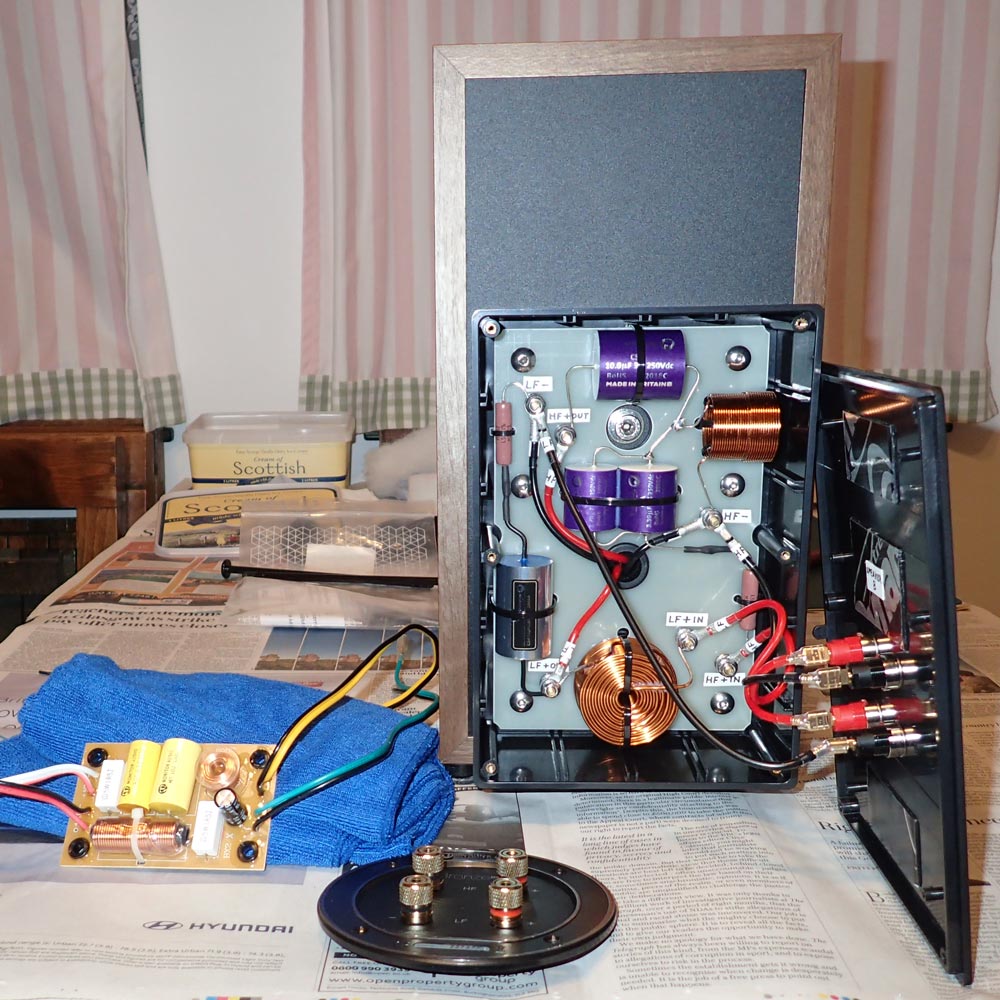 “To modify or replace”, that is the question I recently asked myself, regarding the Monitor Audio Bronze BX2 (2010-2015yr model) speakers that I purchased new back in 2013. These speakers were highly acclaimed when they came out, & still sounded good. However, being very picky, they suffered from bass boom/resonance via the cabinet, occasional sharp highs & a slightly muddy midrange, with the sound distinctly coming from two speakers & not a wide “soundstage”. This despite toeing them in, moving them away from the walls, bi-wiring them, & trying various other well-known mods & obscure tricks!

The cabinet itself has radiused front vertical edges, close spacing of the tweeter to the mid/bass driver & is front ported. Inside the cabinet, there were four blocks reinforcing the corners on the front panel, & one block on the full height figure of 8 brace mid-depth in the cabinet. However, the back panel was not corner reinforced, & the cabinet was made using thin 15mm MDF. Grey foam sheet, 35mm thick, was used in the front section as sound damping & was stuffed around the mid/bass driver basket suffocating it.

The crossover LF section is a 1st Order with Zobel network, & has an iron cored inductor, bi-polar electrolytic capacitor & a resistor. The HF section is a 3rd Order with a single series resistor beforehand (basic L-pad), & has an air cored inductor & MET poly caps. Both inductors were placed at 90deg to each other. However, basic sand cast resistors, & thin wire inductors were used, & the internal wiring was only 18AWG, with the components tightly packed onto a small board. Overall, good construction & decent speaker components were used, considering they retailed for only £250-£290 a pair!

I did an extensive amount of research on the web, including reading the blogs on Hi-Fi Collective, especially the one by P.A. Coupe, & managed to get the inductor values & crossover frequency (3.2kHz) from Monitor Audio. I was also spurred on after watching videos posted on YouTube by the owner of a small audio/loudspeaker company, analysing numerous main brand speakers with the proper test equipment, then upgrading the crossovers etc. & then retesting them. Many times, the expensive speakers have cheap crossover parts, & cheap speakers after modification, can produce better results than the expensive speakers in unmodified format! Many of the modifications I carried out are well known & essential for any decent speaker build/modification. However, some are less well known & others I deviated away from convention! 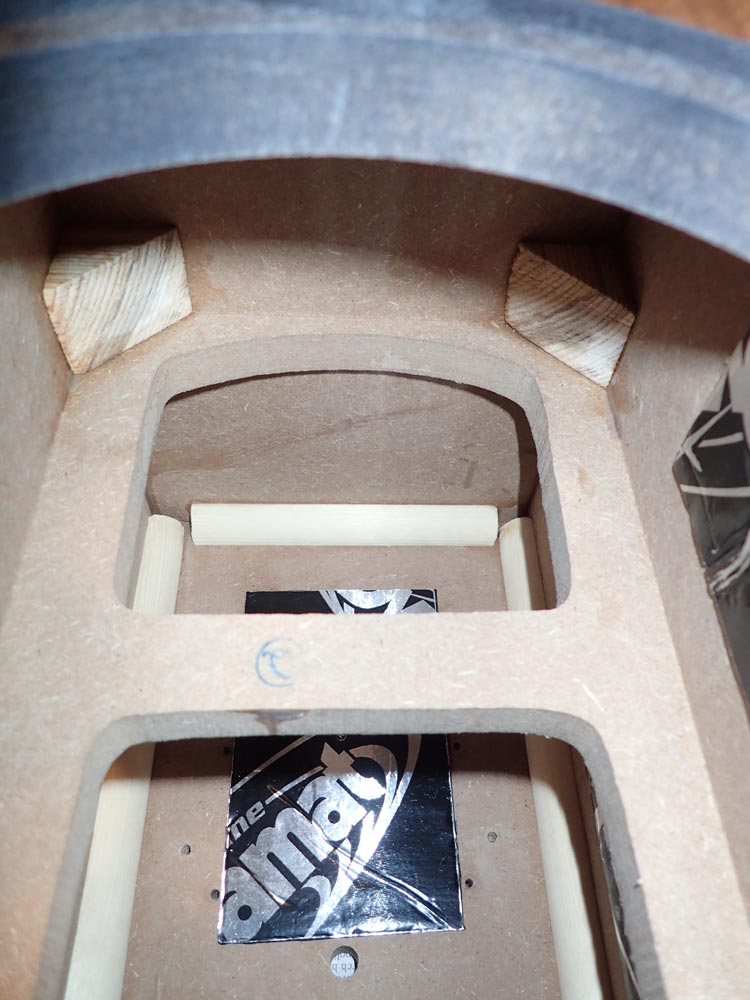 Modifications to the Cabinets:-

All components & sound damping were removed & all internal surfaces cleaned. Primed the MDF with diluted PVA, let dry, & applied self-adhesive bitumen sound deadening sheets to cover the middle half of each side & back panel of the cabinet. Made & glued three more wooden blocks to reinforce the corners on the full height figure of 8 brace. Pine quadrant beading (12mmx12mm) was glued to reinforce the whole way around the inside of the back panel, & parts of the front panel. The sides, top, rear, & bottom panels were lined/glued with 35mm thick white BAF wadding. The sides immediately next to the mid/bass driver & the bottom near the port were not lined to allow free airflow. The highly magnetic, “through bolt” that fixes the mid/bass driver to the cabinet, was remade using a longer non-magnetic stainless steel bolt, cut down, with a matching washer, & correctly tightened (tighten until it just stops wiggling then a further 90deg turn). 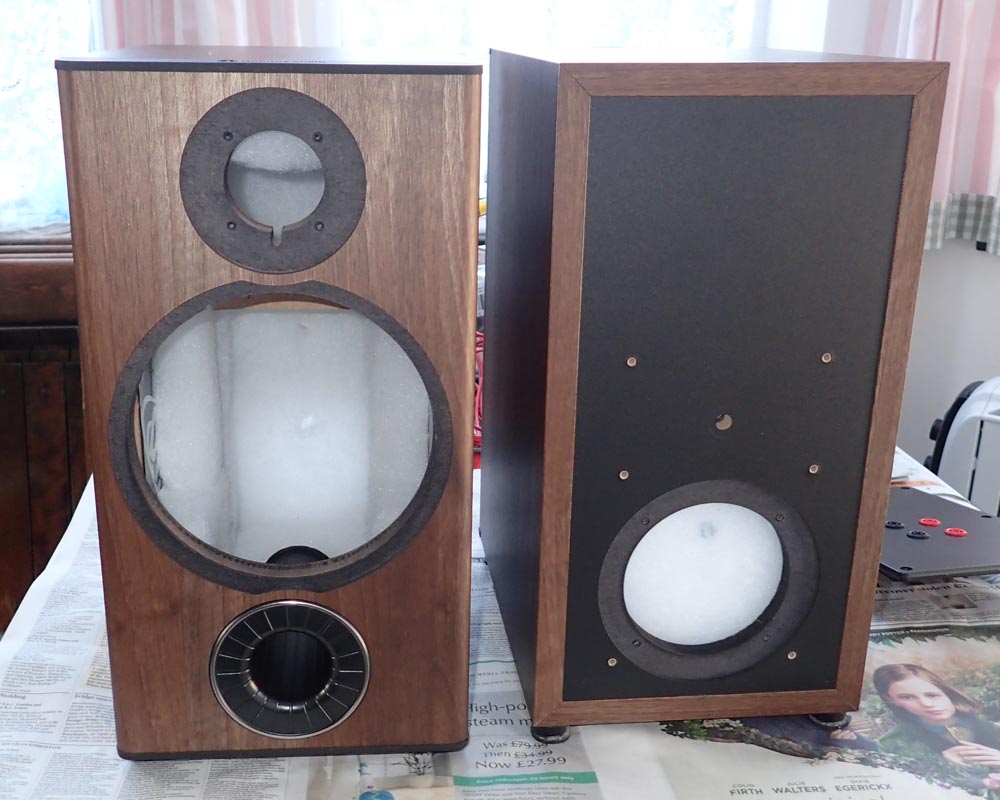 I decided against recalculating the component values or using a different design of crossover, as I do not have a calibrated stand microphone & suitable measuring software. This being the best way to fine tune crossover component values using actual sound measurements from the drivers. Also, I wanted to verify that improving the quality of components, without changing values or crossover design/type, would alter the sound for the better, hopefully! 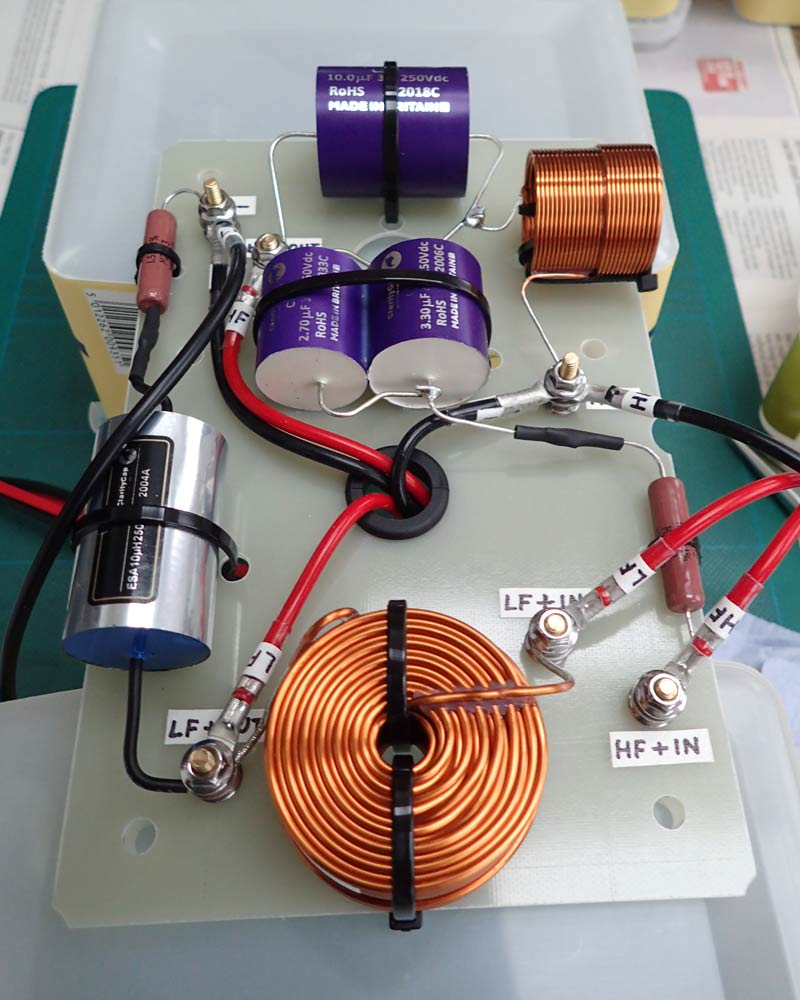 In order to space the components further apart, away from the drivers for less interference, & to cover the hole left by the binding post panel, a suitably large flameproof ABS box was chosen to mount externally on the rear panel. All fixings used in the build are either non-magnetic stainless steel or brass, & the solder used is lead-free silver solder (tin/silver/copper). To easily remove the drivers & crossovers in future, I used push tabs & M4 eye connections on all the cables & sockets instead of directly soldering. All the eyes are tinned OFC & all the push tabs are gold plated (Hi-Fi Collective’s). All connections are crimped & soldered, & have clear heat shrink sleeving over them.

For internal wiring I used silicone-coated, 1000V, “test/measurement” OFC multistrand wire as its highly flexible & soldering iron resistant. Initially, I used the 0.75mm CSA version, it being a similar CSA to the original 18AWG wiring, & to test a theory regarding cable CSA. Later on, I replaced this with the much thicker 2.5mm CSA version. I used the above cable manufacturer’s, gold plated brass connection 4mm shrouded test/measurement back panel sockets (with 6.3mm push tabs) on the box lid. The existing external speaker cables received the matching gold plated brass 4mm plugs & again were crimped/soldered. These connectors were chosen as they have very little extraneous metal in them, & as these & the cables are used in highly sensitive electronic test equipment, surely, they’re good enough for this use?! 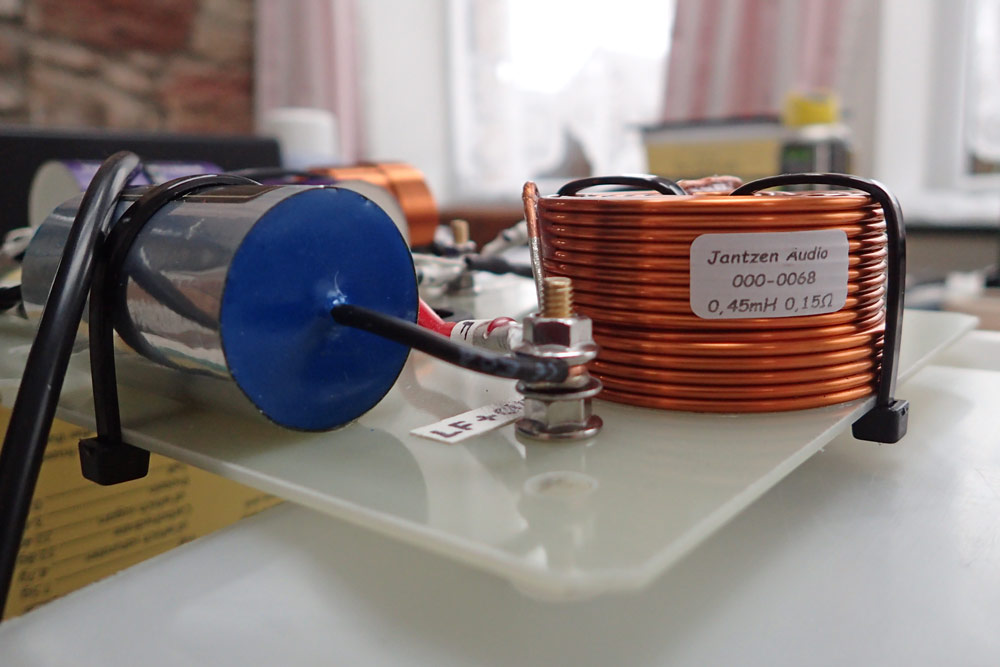 The capacitor/inductor/resistor brands (ClarityCap, Jantzen, & Mills) were chosen as they repeatedly get good reviews, plus the caps were British made! The 250V CSA & ESA caps were chosen as both have a similar construction & low 3% tolerance, with the cheaper ESA as the mid/bass shunt cap. Unfortunately, I couldn’t find a 6uF cap so had to parallel a 2.7uF & 3.3uF on the HF section! Due to the high 3.2kHz crossover point, I chose Jantzen air core inductors with a low DCR of 1/20th of the respective driver stated impedance & placed them at 90deg to each other with as much separation as possible! The Mills resistors chosen were the 12w 1% tolerance versions. 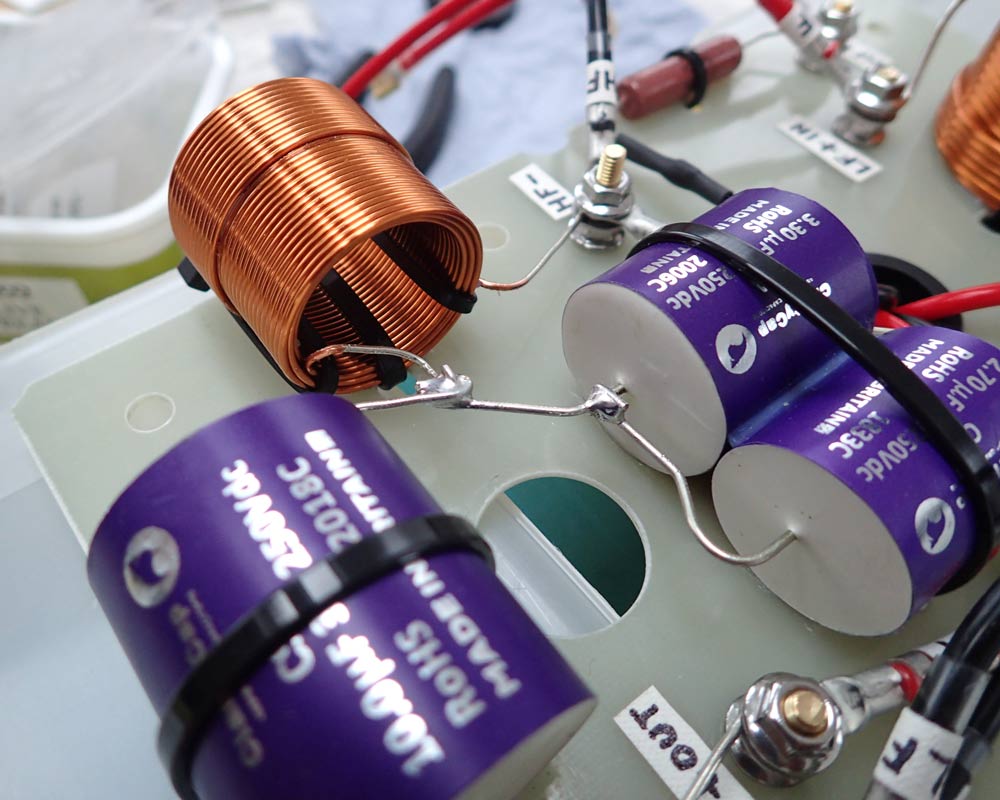 I mounted all the components on a sheet of flame-resistant, no holes/no clad, FR-4 PCB board, using the correct neutral cure clear silicone sealant & heatproof cable ties. All the components I was able to join directly to one another’s leads & soldered. 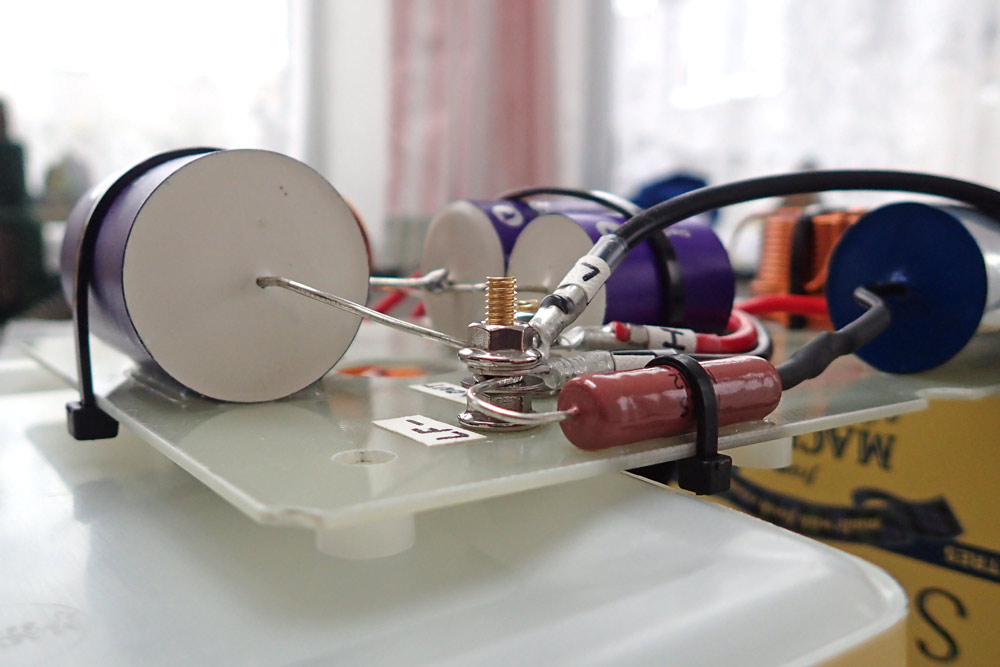 For the main cable connections on the PCB, a brass machine screw with a serrated washer was placed through from the reverse side of the PCB board & a serrated flanged nut was screwed down tight from the front side making a fixed “stud”. A plain washer was placed over this, then the capacitor/resistor/inductor lead was wound once around the stud, then the cable eye(s) were placed over, then another serrated flanged nut is used to clamp everything together. 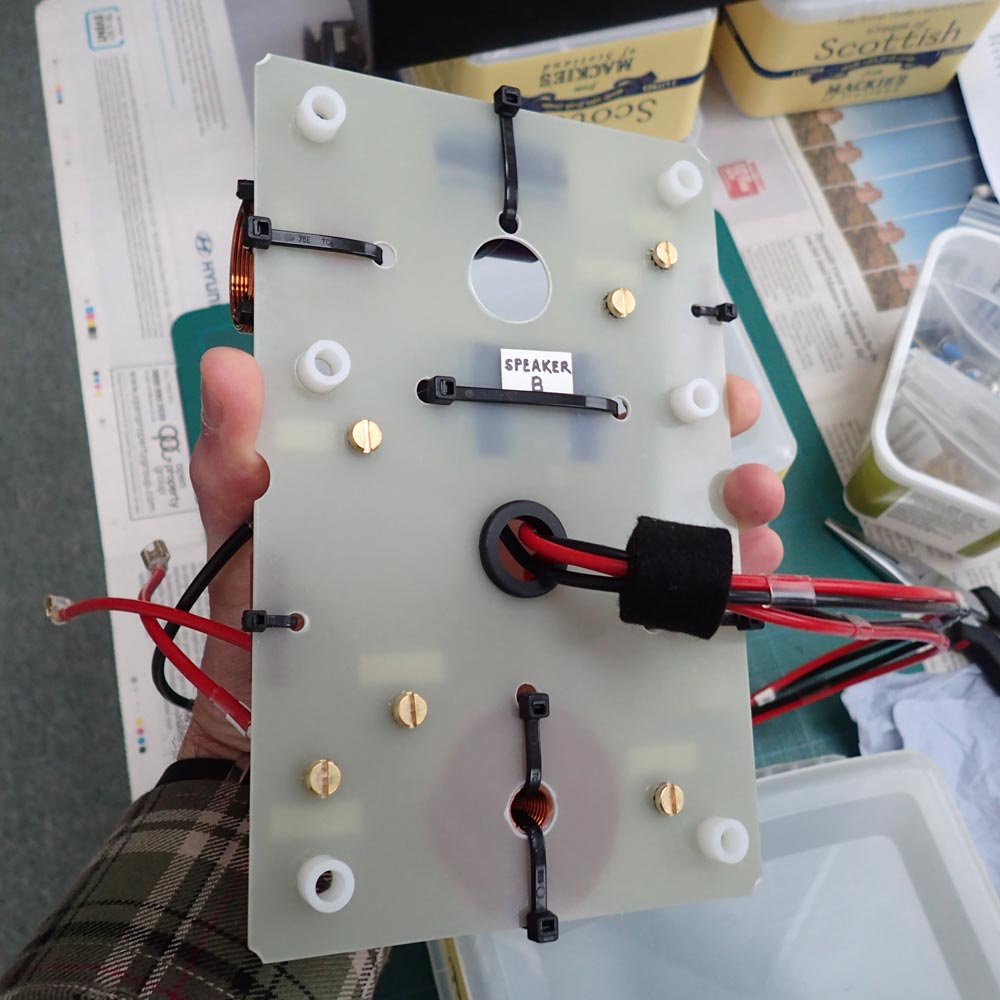 Plastic spacers, 10mm high, were glued to the underside of the PCB board for clearance of the screw heads & cable ties. Six mushroom head wood screws were used to go through the PCB board, spacer & the ABS box, to securely fix the whole lot to the back panel of the speaker. The rear face of the ABS box has a wide strip of thin felt (self-adhesive on one side) to air seal the box to the speaker panel. Where the cables go through the ABS box into the speaker, there is a big felt sleeve to air seal them. 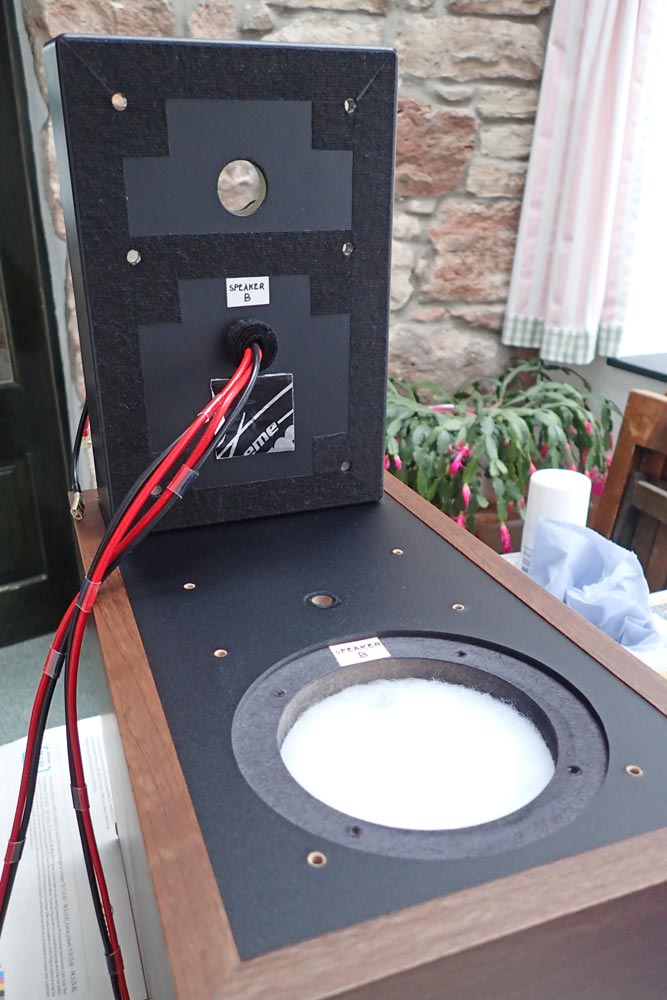 The speakers were placed exactly as they were previously & the rest of the music chain is exactly as before, i.e., modified Denon D-F109DAB system (receiver, CD player, network player), with short length (3m max) modified OFC bi-wire speaker cable. After several weeks of playing lots of different music through them I can confirm that all the above modifications to the speakers have drastically improved the sound! The work to the cabinet has removed all bass boom/resonance, which was to be expected. The high frequency notes are much clearer, & less sharp/tiring on the ears, the mid-range is no longer muddy & there is now a proper soundstage! The best part is when low kick drums with either a bass guitar or a double bass are playing along, you can now tell each separate note, instead of hearing a combined muddy note! The notes are faster & cleaner as the drivers can react much quicker than before, & with no unnecessary “overrun bounce”. All this clarity is available with the 65W class D amp volume set to 10%, so low volume levels are very good, let alone the higher volume levels!! The modifications increased the weight of each speaker from a stated 5.84Kg to circa 6.4Kg. 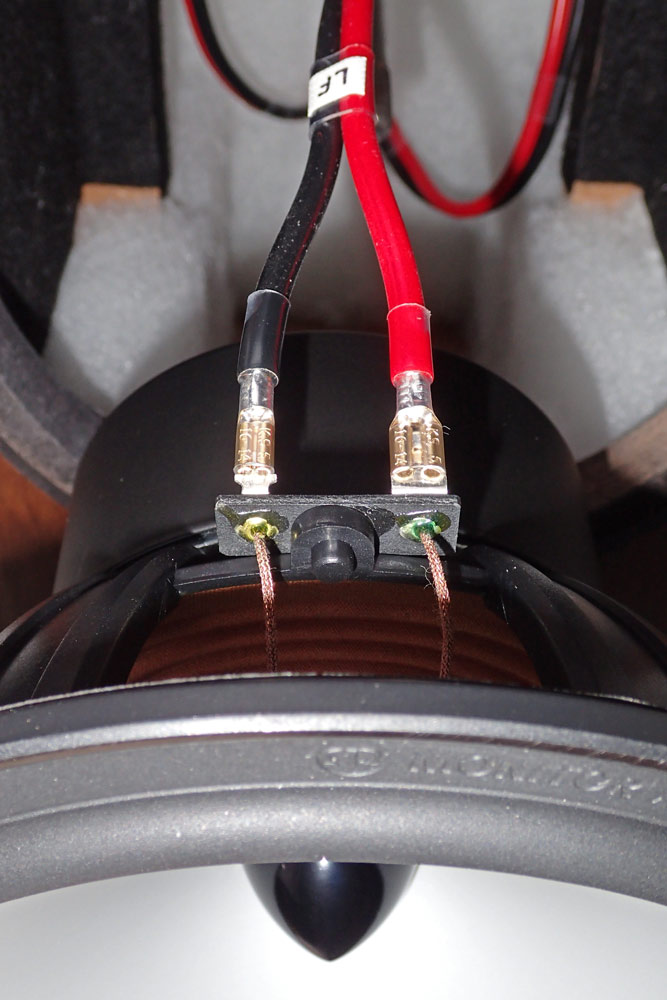 As I initially used 0.75mm CSA cable I did notice that the much lower bass/drum notes, although very clear, lacked body, or “oomph”. So, I remade all the internal wiring with the thicker 2.5mm CSA version & retested. Now the lower drums & bass guitars had the required conviction they needed without sounding “boomy”! I did not notice any difference to the mid or higher frequency notes with this cable swap, which was to be expected. As the maximum total length of internal wiring on any driver is 800mm, the resistance of the 0.75mm CSA is therefore 0.0208 Ohm, & on the 2.5mm CSA its 0.006384 Ohm, according to the manufacturer’s datasheets. These seem insignificant amounts, but there is an audible difference! When I remade the cables, I now used M4 eyes without cable sheath grips, & shortened some of the longer brass screw “studs” on the PCB board. These alterations to lessen the amount of unnecessary metal in the signal chain even further. I have also altered the positioning of the BAF wadding near the drivers & port, several times to fine-tune the “slam/attack” of lower notes. 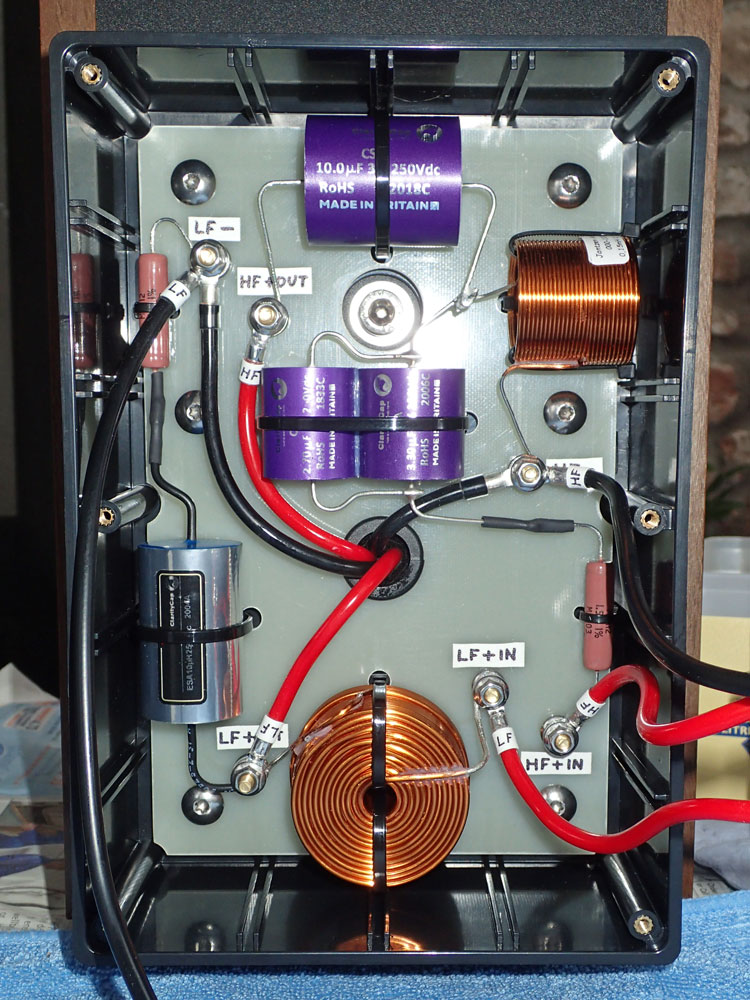 Music is either original CD, FLAC ripped from said CD (using pro software), or purchased FLAC download files from the record label, in resolutions as high as 24bit 192kHz studio remasters. This last format I purchased in 2015 of the highly acclaimed “Meet Me in London” album by Antonio Forcione with Sabina Sciubba on vocals. To say it now sounds astounding with the modified speakers is an understatement - you can now hear the pins drop in the recording studio, let alone “be there”!! 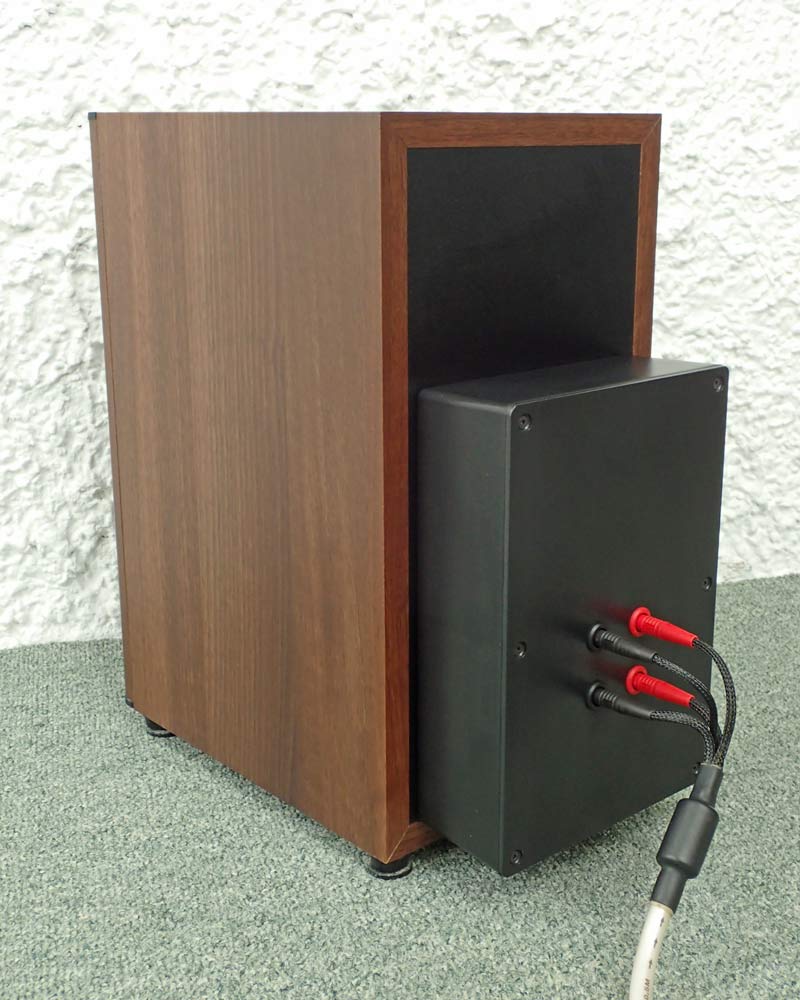 These modifications prove that the sound the driver is producing is only as good as the signal that it receives. If the components in the signal path are of a basic standard, then the sound produced by the driver will be compromised, regardless of the driver quality. It also proves yet again, that mid/bass drivers require thicker CSA cable to provide the necessary power to move them properly!

The hardest parts of the build were component selection/sourcing, design/configuration of the board, accurately cutting/drilling the FR-4 board, altering the gold plated push tabs to tightly fit the odd sizes on the driver terminals, & making 16 cables crimped & soldered on both ends…twice!! Total cost for all components is at least £395 & possibly up to £450, as I already had PVA glue, felt, solder, cable ties, bitumen sound deadening sheets, & wood blocks.

Many people would consider spending £400-£450 to modify a set of 8yr old speakers which originally cost £250-£290, as utter madness. However, having seen the test results, insides & crossovers, of some expensive similar-sized speakers, I doubt you could get the same sound quality from a set of new “off the shelf” speakers without spending at least £1,500.