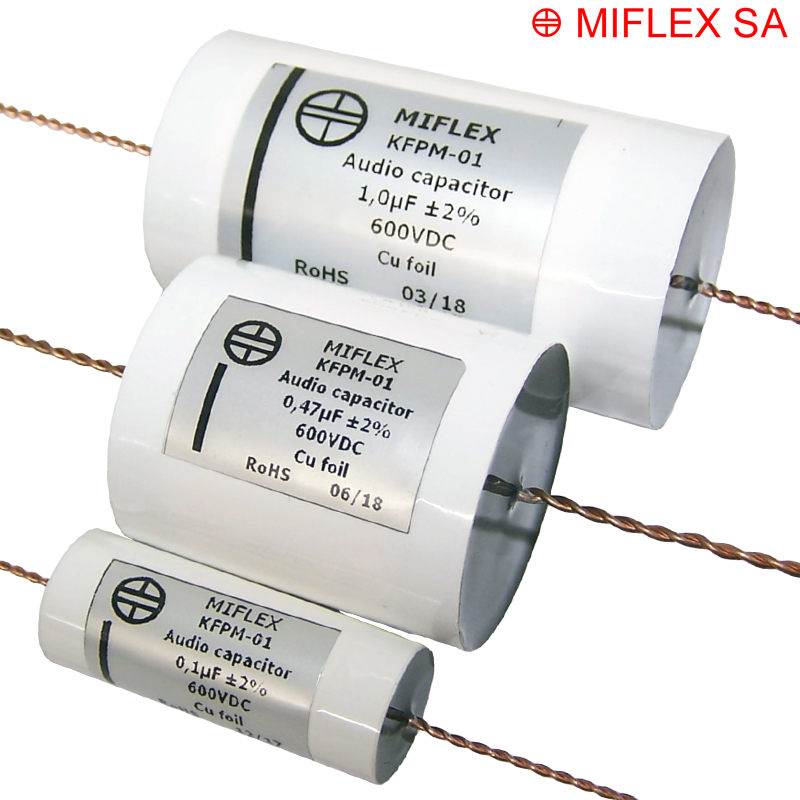 I was introduced to Miflex capacitors over a year ago by a customer of ours - the finders fee was a couple of free samples for him, hand selected from the first batch, many thanks PT...

Since then we haven't looked back. We started with their copper foil paper / polypropylene in oil (KPCU) and their aluminium foil paper / polypropylene in oil (KPAL). They have been well received and we have had some very good feedback. Miflex are a well established capacitor maker from Poland whose major sector is industrial capacitors, however they have been making audio capacitors for sometime now and seem to have been a little overlooked. Polish engineering has always impressed me, they offer very good quality parts at reasonable costs so I am a big fan.

When I had an interesting conversation with PB, another customer, who was singing the merits of their KFPM-01 range I couldn't resist - I bought the full range in! He had an interesting view point. Back in the day, around 10 - 15 years ago, oil impregnated capacitors got a bad press as some had a tendency to leak oil. Paper in oil capacitors were the go to capacitors in valve upgrades and builds and still are today as production techniques and reliablity are much improved these days. However as they say once bitten twice shy, PB won't use them anymore. So when he found the KFPM-01s he started using them with great success.

Where the KFPM-01's are different is that they do not use oil in their production. A simple copper foil based wind using polypropylene as the di-electric. I would suggest these work incredibly well as signal capacitors, the range is slightly limited as they only currently make 0.1uF to 1uF, however plenty of values for the all important decoupler capacitor.

It gives me great pride to introduce to you the Miflex KFPM-01. Let me know how you get on with them.