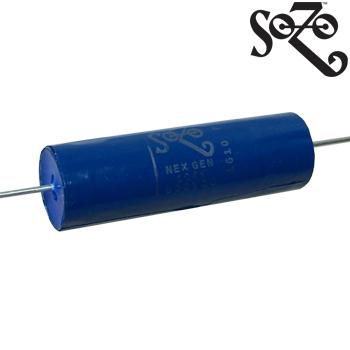 The BlueMolded line of capacitors are retrofits for Astron or Blue Molded caps used in vintage tweed, brown, and blackface Fenders®. These capacitors amazingly capture vintage Fender® tones of the Blackface era, and the famous 1959 tweed 5F6-A Bassman era which is so musical and good, Marshall™ modeled their amps after them!

After years of painstaking research and development, in 2003 SoZo Amplification began manufacturing the SoZo Mustard Cap™ capacitors, which quickly caught on among discriminating musicians and amp designers. Now, hundreds of thousands of capacitors later, SoZo has engineered capacitor product lines optimized for different products, including amps by Marshall™, Fender®, Vox®, HiWatt, and others, as well as professional sound gear from Neve, API, Neumann, Universal Audio, Urei, and virtually any quality gear from the 1950s on.

These caps are successful recreations of the originals and are superbly built and excellent-sounding caps. When one considers the audio signal passes through as many as ten capacitors before exiting the amplifier, you can see how these components play an extremely large role in the tone of the amplifier.