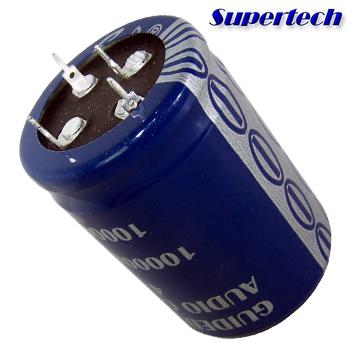 The Guided Current 4TTN (T-Network) capacitor originally evolved because DNM Design required reservoirs that behaved only as capacitors, without unwanted effects such as stray resistance, inductance and eddy current generation caused by the presence of two vast conducting surfaces in the circuit.

These extra terminals are connected in a T pattern at the centre and ends of each capacitor plate, guiding the plate current along a controlled path. The Guided Current 4TTN (T-Network) design reduces the effect of unwanted resistance and inductance and the technology is combined with slit foil plates to eliminate eddy currents.

These capacitors are an order of magnitude better than normal 2 terminal ones and they transform the performance of linear and switching audio amplifiers.
In tests under load, the 4TTN capacitor's ability to attenuate is 11dB better than a two terminal capacitor and this extra performance is maintained up to extremely high frequencies

Subjectively, the performance of the Guided Current 4TTN (T-Network) is absolutely unparalleled - it transforms the sound of even the best amplifiers.

See the datasheet below on how to wire them up.