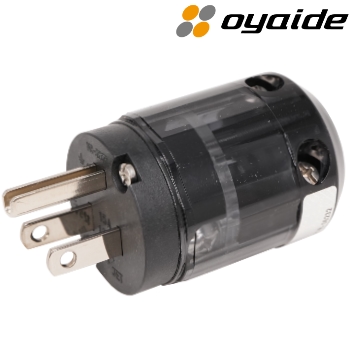 The M1/F1 is the flagship model, making no compromise. The result is a sound that is powerful, dynamic, and highly sophisticated. The M1/F1 represents a major step forward in cutting-edge technology having inherited and improved upon the advanced technologies of the P series.

Based on the technology of M1/F1, we have achieved to create P-004 as its cost-performance by integrating the features of the M1/F1 and P series. As well as other P series audio plugs, the core of P-004 is composed of the selection of materials, plating technology, and usability.

Inheriting the most core factor of M1/F1, the contacts of P-004 are made of beryllium copper which ensures mechanical integrity and high conductivity. The plating is also the same as M1/F1 which is a combination of platinum and palladium which was selected after repeated listening tests.

The body is made of 30% glass-filled PBT which has excellent machine-ability and provides superior electrical isolation. And the outer cover of the P-series is made of PC(PolyCarbonate) for its rigidity and hardness. In addition, the “Black-Diamond” color of the P-004 outer cover represents its emotional and exciting sound.

Made in Japan by Oyaide