Back to the resistor bake-off - jaudioresearch 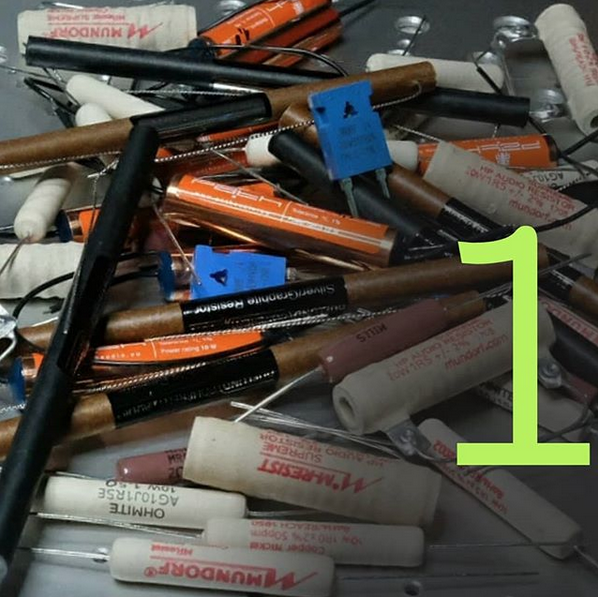 Back to the resistor bake-off - written by jaudioresearch

Before I started my tests, I did put around 2 days of music through each resistor to give it some burn-in time as some manufacturers do recommend. Two days, in fact, is not much, as some people claim, that let's say Path Audio resistors take at least 100 hours to sound at it's best, either this phenomenon has something to do with a real physical change in the resistor or perhaps it's just the result of a psychological adjustment to the new sound, I don't know, but I believe that 2 days of music for each type of resistor should be enough to come up with my subjective opinion. To make it easier I decided to split the above resistors into 3 groups.

I put them in a separate group due to their own character of the sound, they do stick out of the rest, they sound fantastic, but I find them the most colored out of all. When placed in the tweeter network, both sounded very spacious, super see-through, and transparent, never bright but with lots of detail and super FUN to listen to. They well outperformed my Caddocks MP930 that I had in my speakers originally.

When I tested them for the midrange network, the overall sound was great but a little less focused compared to the others and the mid-bass sounded a little too soft to my taste, but the general tone was very nice, and honestly, I couldn't tell much of the difference between both types, they both share a similar sound character, perhaps the graphite was slightly warmer but both are very enjoyable with lots of micro-details, and the silver content helped to ad the sparkle to it definitely!

In general, they are great resistors and definitely the top level, but not very neutral sounding to my opinion.

Please do not mistake the Group 3 (last one) with anything bad! Group 1 doesn't mean the best either! :-)

Group 3 is slightly less vivid than Group 1 and 2, but the difference is not a day and night and all depends on what speakers you are upgrading.
Let's say, upgrading for example fantastic 20 years old KEF or Tannoy speakers with Group 3 resistors is the way forward!

The one resistor that popped out of the group 3 is the Ohmite Audio Gold, this resistor is the Duelund of the group 3, most colored and pleasantly sounding with nice sparkle at the top of the spectrum, almost like having a sweet lollypop when listening to the music at the same time :-) but Duelund offers way more mature and high-end sound than Ohmitte gold obviously!

Back to the neutral sound, Mills and Mundorf M-Resist this two are fantastic and super neutral-sounding resistors that remind me of my current Caddock mp30 but with way less technical approach to the music, you will get a little less sparkle than group 2 can offer, but the general sound is very good.

And as I mentioned before, all depends on how much you are willing to pay or how much you love your speakers!?

Mills and Mundorf M-resist are super neutral and well sounding resistors for not much!

In case you want to ask :-), I decided to leave Powertron resistors in my speakers, for mid and tweeter network, as I found them the best sounding out of all, great upgrade in comparison to the Caddock MP930, in fact not bad sounding resistor but in a totally different league than the Powertron miracle.

All the above observations are my own subjective feelings and the same resistor may sound totally different in your speakers/system.

Disclaimer: Opinions in this article are that of the author and not endorsed by HiFi Collective