A Pair of Wharfedales, The story of Gilbert Briggs and Wharfedale speakers 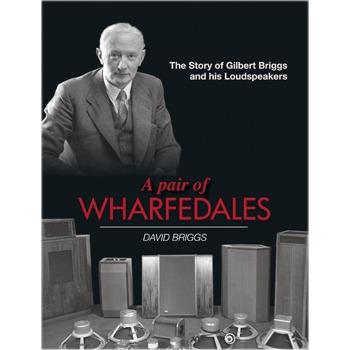 In later life, Gilbert Briggs was given the accolade ‘father of hi-fi’ and this was richly deserved. He started Wharfedale Wireless Works in 1932 and designed the famous Wharfedale loudspeakers himself for over 20 years. He wrote 21 books on all aspects of audio for the layman between 1948 and 1967, published through Wharfedale, which sold well over a quarter of a million copies worldwide. He also staged audacious concert-demonstrations featuring ‘live versus recorded’ performances in such venues as the Royal Festival Hall, London, and Carnegie Hall, New York, throughout the 1950s. Yet, he had no formal relevant training when he started Wharfedale, virtually bankrupted by the Depression which ended his 27 years in the Bradford textile industry—just a passion for music and a drive to improve the reproduction of sound.

In his thoroughly researched book, David Briggs interweaves a biography of this remarkable man with a history of the Wharfedale Company and its products from 1932 to 1978. Along the way we encounter many of Gilbert Briggs’ fellow audio pioneers, such as Peter Walker, Harold Leak, Cecil Watts, Arnold Sugden, Edgar Villchur and Raymond Cooke, and relive the most exciting period in the history of high fidelity sound reproduction. Lavishly illustrated with archive photographs, brochure material and advertisements this book will delight Wharfedale fans, audiophiles and those who simply want to know more about the personality behind the brand.
From the Foreword by Professor the Lord Broers FREng, FRS:

Enthusiasts of hi-fi sound in its early days will find this book a compelling read as they, at last, learn who was behind the Wharfedale speakers that were their pride and joy, and how their creator took on international competition and produced the best high fidelity speakers of his time. For those born in the last fifty years, most of whom take high fidelity sound as given, it presents the chance to learn of the creative advances that were needed to achieve the clear and transparent sound they enjoy and take for granted.