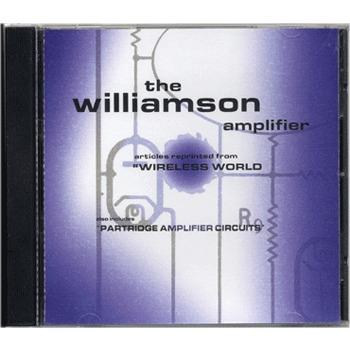 Introduced by Wireless World in 1947 as merely one of a series of amplifier designs, the " Williamson " has for several years been widely accepted as the standard of design and performance wherever amplifiers and sound reproduction are discussed. Descriptions of it have been published in all the principal countries of the world, and so there are reasonable grounds for assuming that its widespread reputation is based solely on its qualities.

This booklet includes all the articles written by D. T. N. Williamson on the amplifier. Both the 1947 and 1949 versions are reprinted, as the alternative output transformer ratios cover a wide range of require- ments. Modifications and additions include pre-amplifier circuits and an r.f. unit, with recently published information on adaptation to high- impedance pickups and correction for 33 1/3 r.p.m. records.

We would stress the importance, if the full potentialities of the amplifier are to be realized, of following the author's recommendations in detail. Even in the U.S.A., where several modified versions have been described, many users adhere to the designer's exact specification with the original valve types. It is not the circuit alone, but the properties of the valves and such components as the output transformer, together with the welding of theory and practice into a rational layout, which produce the results.