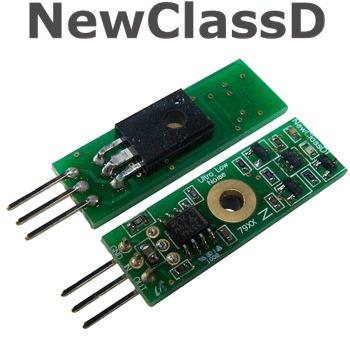 The UWB Regulator is a high end replacement to 78XX and 79XX regulators found in CD / DVD players and other audio equipment, with positive and negative versions available 3.3Vdc, 5Vdc, 9Vdc, 12Vdc and 15Vdc.

The output of the 7805 regulator is often used as a reference voltage for the DAC, or other noise sensitive sections of the audio equipment, like the OPAmps. Unfortunately normal 7805 regulators have a very poor noise performance. Especially if there are external noise sources around the 7805 regulator, like ripple or load fluctuations. In case a fluctuating load is connected to the 7805, or 100 Hz ripple is present on the input of the 7805, the S/N ratio of the 7805 drops down below acceptable level for Audio purposes. In this case you can greatly benefit from a regulator with a good ripple rejection, but even more importantly, a regulator with a wide bandwidth loop, that can remain stable under fluctuating loads.

The UWB regulator replaces the 7805 (or other 78XX / 79XX regulator) as a cheap and simple upgrade of your Audio Player, and has more than 100 times better ripple rejection, 10 times lower noise, and no line and load regulation error. It is discretely made on a circuit board, of roughly the same size as the 78XX / 79XX regulator. This way a regulator can be constructed with better performance than any known IC regulator on the market. 78XX is the positive voltage regulator, while .. 79XX is the negative voltage regulator. Be sure to get the right one.

PLEASE NOTE THE MARK ONE VERSION HAS NOW BEEN SUPERCEEDED BY THE MARK TWO, WE HAVE A FEW MARK ONES LEFT AT DISCOUNT.