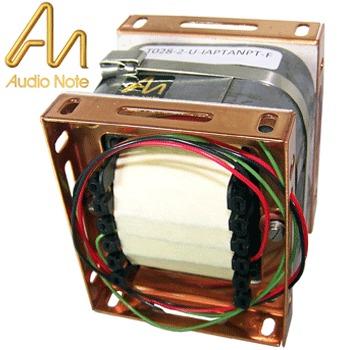 Audio Note have always be advocates of the pre-amplifier output transformer. Instead of using an anode resistor / signal capacitor on the pre-amp output valve, they position a high quality transformer on the anode. The result is an esquisite highly detailed sound.

The TRANS-027 range is used in all their finished products such as the M3, M5, M6 and M8 pre-amplifiers. There are various options on the TRANS-027 as the range has now expanded to include not only copper (primary winding) / copper (secondary winding) but also copper / Audio Note™ silver and all Audio Note™ silver wired versions. There are also the I/E or double C-core versions with different core materials available too.

All Copper – Copper transformers have copper lead out wires, Copper – Silver have copper on the primary and Audio Note silver leadout wires on the secondary and silver naturally silver all round.

The TRANS-011 which has the same options as the TRANS-027 is a pre-amplifier output transformers that can be used pretty much anywhere and are especially used in simple line pre-amplifier circuits like the M1 and M2.

All the above pre-amplifier output transformers are the same size, whereby copper frames come as standard, 78mm wide by 67mm high by 67mm deep, with mounting holes centre to centre at 54mm by 54 mm both with transformer standing up or lying down. However, as a higher quality option we do offer them with solid copper shrouds, as shown in the top right picture, for an additional £ 56.00 per transformer. The copper shroud being non-magnetic improves not only RF influx, but also low level behaviour as it does not short out the airgap on the higher permeable cores like the AN Ultra HiB and the nickel cores this is essential for optimal performance.