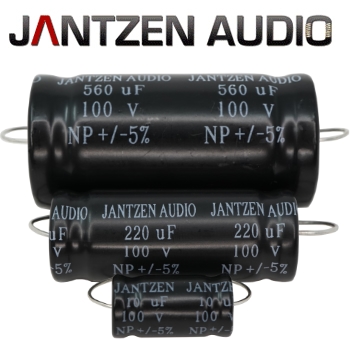 Historically bipolar electrolytics have been used in speaker manufacturing as they are relatively small and have a lower cost than film capacitors. Generally, the equivalent film capacitors are much much larger in size. Bipolar capacitors generally have a higher ESR (Equivalent Series Resistance) than a similar value film capacitor, this is taken into consideration with the crossover design.

So when upgrading bear in mind that this can affect the sound. Some people like to put a low-value resistor in series with a film capacitor when replacing a bipolar capacitor.

There are 2 types of bipolar capacitors to consider; plain and raw. This refers to the type of foil used for construction. The plain type is the superior type and is constructed from smooth aluminium foil which has a low loss, providing better sonics. The Raw version uses a rough surface created by a special etching process which increases the surface area, providing a smaller and cheaper solution.

We at HFC offer several types of bipolar for crossover use.

In recent weeks we have heard from both Mundorf and Jantzen that the special foil used to make the plain (smooth) bipolars is now becoming incredibly hard to source and where they can source it, the prices they are quoting have gone up astronomically to the point of being a similar price to film capacitors. As a result, they have ceased production of the ECAP70 and ECAP50 for Mundorf and the Jantzen ELKO. They are both focusing on making the RAW type. Jantzen has in fact brought out a new line of 5% tolerance RAWs, the eLCAP.

We took this opportunity of buying both companies' remaining stocks of PLAIN / SMOOTH type because we know sonically they are much better than the RAWs and our customers will always choose them over the RAWs.

In the DIY market, there are literally thousands of vintage speakers out there, such as the Celestion Dittons, Wharfdales, and Tannoys to name a few. Upgrade requests on these are quite frequent but some of the values of bipolar electrolytics these manufacturers used back in the day are non-standard. Customers were having to reach the required capacitance by putting 2 or 3 capacitors in parallel. So we had a chat with Mundorf who were happy to make some "old school" values for us. Rather fortuitously we ordered €30,000 worth in October 2020, whereupon Mundorf purchased the material for them before it became very expensive and hard to source.

So we are very proud to announce that in 2 weeks we will be receiving a delivery of the following PLAIN / SMOOTH bipolar electrolytics, all 70Vdc rated:

These values on Mundorf ECAPs are unique to HFC and won't be available anywhere else. Keep an eye out on our website and grab them while you can!