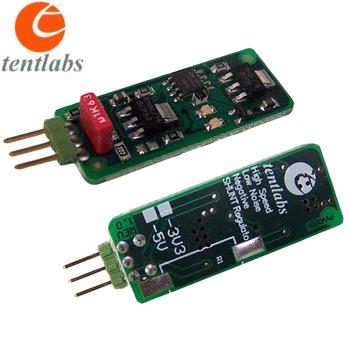 Tentlabs shunt regulators are designed to upgrade power supplies of both analogue and digital circuits, mostly found in CD/DVD players, DACs and similar audio equipment. Substituting, or adding these regulators enhances the sound quality in terms of transparency and resolution, at a reasonable price. Connections, in general, are easily made. This type of upgrade requires little knowledge of electronics hence is accessible for every enthusiastic audiophile DIY.

Purpose
Tentlabs are designed to be applied as an upgrade in analogue and digital playback equipment like (SA)CD players, DACs and alike. The shunts drop in instead of commonly used industrial types of regulators. Having much lower noise, true wide bandwidth and linear output impedance, they'll bring improvement to sound in terms of:
• Higher resolution
• Better transparency
• Clean low ends
• Increased dynamics
Traditionally used voltage regulators never have been designed for audio applications. As an example, the very popular 7805 initially was designed as a voltage regulator for digital logic and low microcontrollers - who cared about bandwidth or output noise. Derrivatives like 7815 and 7915 are widely used to supply the analogue output stage of CD players. About time for an upgrade!

Technology
The shunts consist of an active, wideband, current source to isolate the input from the output. The output is regulated by an active shunt regulator with both low output noise and wide (typically > 200kHz) bandwidth. For RF frequencies, a Wima capacitor is integrated on the board, which in total measures 15*35 mm.