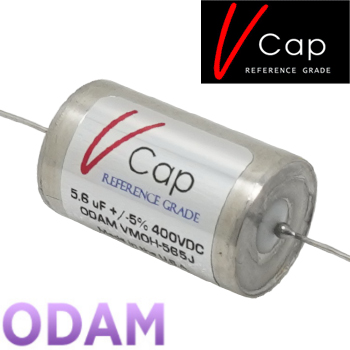 In 2005 V-Cap launched the V-Cap OIMP series the ground-breaking Oil Impregnated Metallised Polypropylene film capacitor series, offering transparency, reliability, and unprecedented low noise; the V-Cap OIMP series found immediate, enthusiastic market acceptance. Building on VH Audio founder Chris VenHaus' twelve years plus of innovation in manufacturing, materials sciences and metallurgy he has taken the OIMP one step further to create the ODAM. The mission: To rival the performance of the very best film/foil capacitors on the market, with a lower cost and added versatility of smaller size. The result is the new V-Cap ODAM capacitor series, which sets a new standard for transparency, musicality, and reliability... in a compact form factor.

ODAM stands for Oil Damped Advanced Metalised. Let’s take a look inside because this unique design is very much the sum of its parts – each carefully chosen to maximize musicality, by minimizing internal vibration, optimizing electrical performance (i.e. DF and ESR) and improving reliability... all while greatly increasing part-to-part consistency.

Beginning with a new, custom-manufactured amorphous, pinhole-free dielectric with a smooth, consistent surface. This optimized surface offers a superior application of and fusion with the metallisation layer. It also forms a critical barrier to corrosive elements like oxygen & moisture while greatly enhancing the capacitor’s long-term reliability, stability, and self-healing properties:

The effects of mechanical damping in capacitors have long been understood. Here too, the V-Cap ODAM series breaks new ground.

Meticulous attention to detail has long been a hallmark of the V-Cap line. The research focused on finding ways to further push the boundaries of performance, leveraging a symbiotic relationship between engineering, modern robotics/materials, and dedicated American experience & craftsmanship.

The continuous quality control process includes material quality assurance testing, work-in-progress protocols, and a rigorous series of precise measurements throughout the build process. A key outcome is to minimize sample-to-sample variations, because even small deviations between L & R stereo channels may affect stereo imaging and instrument placement/separation within the soundstage.

The short lead indicates the outermost foil and should be connected to the lowest impedance path to ground. Another way to identify outer foil is the writing on the label flows towards the outer foil.

The ODAM and OIMP series capacitors have metal bodies that are electrically conductive. Ensure that the body doesn't make electrical contact with any other portion of the circuit other components or electrically LIVE circuit traces. Heatshrink, 3M foam tape, or silicone tape around the body may be used to help insulate, and protect from electrical short.

THE EARS HAVE IT

V-Cap has been testing the ODAM series since October 2017 with a select group of Audiophile component modification professionals, equipment OEMs, and highly experienced audiophiles who’ve heard nearly everything else on the market. Testing the ODAM caps in a wide range of applications, including speaker crossovers, inter-stage & output signal coupling in both vacuum tube and SS gear, as well as electrolytic power supply filter cap bypasses.

Sonic impressions submitted were (and continue to be), overwhelmingly positive. Regardless of the application, testers consistently highlighted attributes related to realistic timbre/textures, tremendous instrument separation, remarkable layering and imaging, accurate leading edges of instrument notes, incredible low-end slam/thrust, and the absence of any discernible sonic imprint.