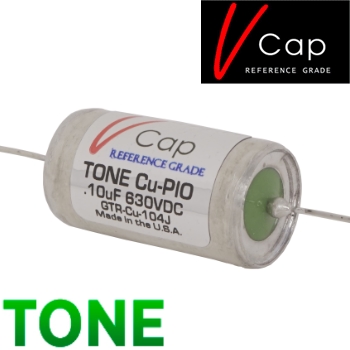 The all-new V-cap TONE capacitor is a new series of guitar/amp capacitors from V-Cap, copper foil paper in oil capacitors -  built for players who are passionate about unleashing the full potential of their instrument.

V-Cap TONE is designed and built in the US. V-Cap already have a string of award-winning capacitors to their name as used by audiophiles and leading high-end audio equipment manufacturers since 2002. Their goal has been to help connect music lovers to the Soul of the Music.

I became interested in developing a cap for guitars after a conversation with my friend Brian Kelly (Cincinnati / Nashville). He recalled a story from the 60’s when he and Seymour Duncan raided the 'graveyards' of old "tube" radio and TV repair shops looking for old 1940’s and 50’s ‘paper in oil’ caps. Brian said: “I honestly thought Seymour might have lost his mind when he came up with the idea that these old, leaky, sometimes radically out-of-spec caps might really be a significant part of the classic Fender sound.”

Coming from the world of high-end audio, it was a bit of a head-scratcher to me, why anyone would want those old caps. Most old PIO caps are notoriously unreliable, and after acquiring/testing the ‘Holy Grail’ caps in the guitar world, there was nothing special about the electrical measurements. In fact, many measured quite poorly. BUT… that sound… it doesn’t lie…

I was hooked, and it became a mystery & obsession I felt compelled to understand/solve what made these special... and see if I could magnify and expand upon those attributes.

Our new line of V-Cap TONE capacitors is the result of 4+ years of extensive R&D. We believe we’ve ‘cracked the code’ for what makes a great guitar cap, capturing the ‘magic’ of those select 40’s & 50’s caps, but with far better consistency and reliability.

ABOUT THE NEW V-CAP TONE CAPACITORS

TONE takes the time-honored PIO concept and reimagines it, with bleeding-edge manufacturing techniques and materials, American craftsmanship, and some serious experience designing what many audiophiles feel are the best high-end audio capacitors ever made.

We began by figuring out why the best vintage caps worked so well. Then, we applied our knowledge of materials and manufacturing to enable you to extract the absolute deepest, most expressive tone your instrument is capable of. At the same time, we addressed obvious issues with reliability inherent to ‘vintage’ cap tech.

TONE is a ‘wet’ PIO capacitor, which means the winding isn't just impregnated, but also fully immersed in fluid, and then enclosed with mil-spec glass hermetic seals. Unlike many traditional ‘oil cap’ designs, your TONE cap will NEVER dry out. The cap winding itself is made with the purest form of copper foil available, and since it’s encased inside a brass canister… it’s also fully shielded. This ‘bullet-proof’ construction, together with solid-core, pure copper leads makes installation a breeze.

A rigorous multi-step QC process ensures that the caps are consistent batch-to-batch and across values. One more refinement: you don’t have to wait for the caps to ‘leak’ before they sound good… we build them to sound GREAT, right out of the box.

ABOUT THE TONE SOUND

Brian Kelly, a highly respected player from the Cincinnati / Nashville areas not only provided the original inspiration for TONE but has continued to offer great input along the way. Thank you, Brian! I am all in on these caps. Chris spent years figuring out how to minimize the problems with the original caps and, at the same time, maximize the potential of the PIO concept. It's a significant accomplishment. He is one of the few people with the background in cap design to tackle this problem.

Andy Rothstein of Rothstein Guitars has been offering CuTF and TFTF V-Caps in his pre-wired guitar harnesses since 2005. He was an early tester of our TONE cap prototypes and is an accomplished jazz/fusion guitar player. His feedback was instrumental in evaluating later-stage construction variants. I have your new caps in all of my electric guitars now, and they sound fabulous! I have .033 in my Jazzmaster and Strat, .022 in my Gibson, and .047 in both of my Teles. You have "hit it out of the park" with these. I feel your new PIO caps have more character and depth than other caps, and I'm getting wider, more usable sweep out of the tone pot it is paired with. Truthfully, the best way I can describe it is that they really have a certain "mojo" to them.

Don Butler – Musician and guitar/amplifier Tech, who's customers include Robin Trower, John Fogerty, Elliot Easton, Daniel Lanois, Derek Trucks, Peter Stroud, among others... Don KNOWS what GREAT tone sounds like. Your caps have a warmth and clarity that all other caps just don't have. You can hear harmonics and note detail that that are masked by other caps. These are the best caps I've heard in both my amps & my guitars. They are like having a Bentley instead of a Prius.