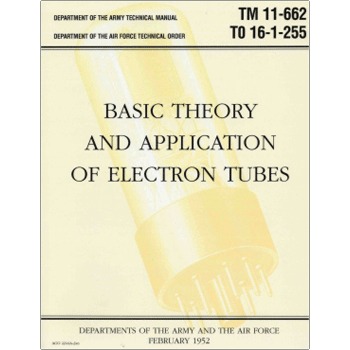 Basic Theory And Application Of Electron Tubes. This is an Audio Amateur reprint of an American Army and Air Force training manual. Being a military publication, the contents are very matter of fact and extremely thorough. The book consists of 12 chapters, starting with the first steps of valves, and outlines what you can achieve with such a device. Chapter 2 covers thermionic emission, basic principles and all other related emissions.

The next chapter covers Diodes and breaks it dowm, both physically and electronically, top marks for clarity of its description. The action of the diode is investigated, this forms the basis all vacuum tube operation. Next for discussion is the triode, adding to the lesson of the previous chapter as there is now the grid involved. Charactersitic curves are introduced. Using a type 6J5 as an example, the data is presented in it's various forms, grid curves, plate curves etc. The concept of transconductance is also introduced and a method of graphically determining gm from the curves is described. Also discussed are the load line and operating point, the use of graphical diagrams is really excellent here.

The shortfalls of triodes are discussed which leads us onto Chapter five, Multielectrode Tubes. This covers tetrodes to octodes. The tetrode is described first, with it's screen grid to combat grid to anode capacitance, but also it's downfall, secondary emission. A short chapter due to the quick take over of the pentode. is the subject of the next section. There is a nice piece on beam power tubes (beam tetrodes). At the time they were the latest development in valve technology and were seen as an improvement over the traditional pentode.

There are internal diagrams illustrating the action of the beam plates. The final section briefly describes those valves used as mixers in radio sets, namely the heptode and octode, and valves with more than one element within the envelope, such as your double triode. Chapter six covers amplification. Classes of operation are described with their relative efficiencies and distortions.

Amplification is graphically shown by projecting a waveform onto the valve's dynamic characteristic, illustrating the magnifying effect. The various methods of biasing a valve are shown. Chapter seven covers the various forms of interstage coupling used, the RC coupling method, The RCL coupling and transformer coupling. The frequency response and gain of each of these circuits is analysed mathematically in order to illustrate the differences between each type. Tuned circuit coupling and direct coupling are also briefly discussed. Chapter eight talks of rectifiers and diodes. Beginning with power rectification, full wave and half wave rectifier circuits and the waveforms present at the output of the circuit. Then signal detection, the common types of detectors using diodes and triodes are briefly covered with an outline of their relative advantages and disadvantages. Chapter nine is entitled "Oscillators" and here we move more firmly into communications territory. Chapter ten talks of large transmitting tubes. This chapter is comprehensive and takes the student from the filament to the antenna. This is a very effective book, logically set out.