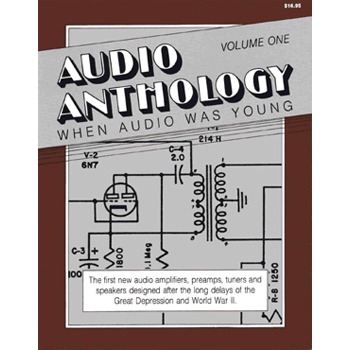 Unless your earliest memories of sound reproduction are steeped in the smell of varnished cabinets with chrome-plated bowls filled with steel and cactus needles, as well as a handle on the side that needed cranking often to keep the platter spinning, you will not, perhaps realise how surprising and startling the new world of electronically reproduced records seemed in the late forties. Radio was a matter of large pieces of furniture in the living room which, if they were expensive enough, included short wave and a green eye that looked sleepy when tuned.

A great deal of the basic design work on sound reproduction had begun in the late twenties and early thirties. One need not look further than the papers from Bell Labs or the pages of The Gramophone to find discussions of sound quality, tracking distortion, and directionality. EMI's patents on our current two channel reproduction system, based on Alan Blumlein's work, were obtained in 1932.

The enforced dormancy imposed on audio technology's flowering by the Great Depression and World War II resulted in a rocket-like acceleration in its development afterward. C. G. McProud founded Audio Engineering Magazine in 1947 and thus provided a central clearing house for what designers and enthusiasts were doing to develop the hardware for producing high quality sound. Only three years after the magazine's inception, McProud reprinted a selection of articles, all carefully corrected, from the publication's pages.

Those of us who were just discovering the contrast between the mechanically reproduced sound from the old phonographs, and compared it to the new electronically reproduced version, had an experience that caused an almost unquenchable thirst for more. At the time Audio Engineering was being first published, Armstrong's FM was an untried novelty, almost simultaneously, Goldmark's longplay disk appeared. The GE variable reluctance cartridge had stylii (a new word we all learned quickly) for both microgrooves and the old 78s as well. It was a heady time when developments of far reaching significance were appearing in every other issue.

This is an appropriate place to offer a small tribute to the remarkable work of C.G. McProud. His magazine was highly professional, the content carefully checked and presented, and the range of topics remarkably broad. His work laid the groundwork directly for the founding of the Audio Engineering Society. McProud's work, both as editor, designer, engineer and author, is a monumental achievement. His work was far more than theory. He was a thorough and careful engineer, but also an accomplished technician and artisan. His handiwork in realizing the projects he designed was as elegant as the designs themselves.

We believe the record of those days, as contained in McProud's anthologies, is something many in this generation will welcome. This first one, if the recep- tion is enthusiastic, will be followed by others.