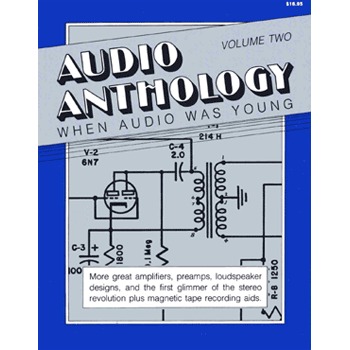 C. G. McProud's second collection of articles taken from the pages of Audio Engineering magazine published between 1950 and 1952 are in a neat balance of nearly equal quarters. The first segment offers nine power amplifiers followed by nine on power amp characteristics including feedback, loudspeaker damping, cathode followers, mismatch problems, and the mysteries of cathode bias. Preamps follow in the next quarter including two for the then new magnetic phonograph pickups, DC power for preamp tube heaters and a whole array of articles attempting to bring some order and understanding to the jungle of recording equalization curves being used by record makers. And tucked into the middle of these offerings is a first article on stereophonic reproduction and how it might be realized by filtering of the mono signal. Then McProud pauses to offer a landmark article on construction practice that is still valid today even when etched circuit cards have displaced terminal boards and beeswaxed cord lacing for cable harnesses. Next the subject switches to loudspeakers starting off with resonant enclosures and port sizes needed for them. Reflexed cabinets, how to deal with resonance peaks and practical realizations of Bass Reflex cabinets are all present, along with a survey of horn types and how to build several bass enhancing versions.

The volume closes with two tape recording accessories by McProud in the form of a portable interview amplifier including a mike, level control and meter-designed to work with the old Magnecord tape machines-and a tape playback preamp.

All this equipment was designed to be built by the amateur in a day when there were few stores you could walk into to buy these items-at least not in many cities and not at a price the ordinary mortal could afford. Many of the designs were ahead of the manufacturers who were not yet producing much in the way of serious equipment for home use. McProud had been alone as an audio publisher until 1951 when the first issue of Milton Sleeper's and Charles Fowler's High Fidelity magazine appeared.

But all through the decade of the fifties, McProud kept the "engineering" in his magazine's name and at the same time worked diligently and successfuly to help found the Audio Engineering Society. These pioneering articles had a profound effect on audio's gestation period in postwar America. They enshrine a standard of excellence which deserves study even now-perhaps most especially now.