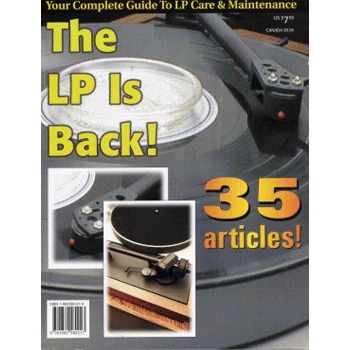 When the digital compact disk burst upon the world in the early 1980s, pundits everywhere sounded dire death knells for the vinyl "Long Play" phonograph disk. Only 30 years old as a medium, the LP was so dubbed when it appeared in the late 1940s because it could contain 25 minutes of music per side whereas its 78rpm predecessor disks, made of shellac, contained only four and a half minutes of music per side. The LP was an instant success (despite RCA's typical wrongheaded holdout for their 45rpm seven-inch alternative) and the music industry took to the LP with energy and excitement. Music never before available was suddenly on the record-store shelves, and the record stores themselves multiplied like mushrooms to sell this new product.

History seemed to repeat itself when the CD arrived and to many it appeared that the LP would go the way of the old 78rpm dinosaurs. All was not quite the same, however, as a small number ofaudiophiles were highly critical of the quality of the music on many of the early CDs. That group was small to begin with but has since been growing larger by the year. It is fairly common today to read assessments of record quality comparing the same performance on its CD and LP versions, with the LP being judged a better, more musical and natural sound by a surprisingly wide variety of commentators. Criticism of the CD's technical shortcomings has increased steadily in the last three years calling for better digital-sampling techniques to produce sound which is nearer the original musical event.

Noticing that this love of the LP had not diminished, that manufacturers began to produce new versions of their turntables, tonearms, and cartridges, and that companies who were making new long-playing records began to appear, we decided to lay the keel for this book.

Our company has been publishing articles about audio reproduction for nearly 30 years-since 1970, in fact. We also knew of a number of articles published by other authors in other periodicals which would be highly useful to anyone with a love for LPs, or possibly those with large collections of 33 1/3pm discs. It is for those who have a serious interest in preserving their collections and playing them with the absolute best reproduction possible that we gathered this collection of articles. Frankly, this collection may contain more than any one person really wants to know about reproducing the sound pressed into the surfaces of these rotating platters. But there is something useful here for everyone.

The first concern of most of us is to keep these pesky things clean. They are subject to static charges that make them natural dust collectors. Keeping them clean is very difficult to achieve, but there are ways to succeed. Playing the disks with a tonearm, even with a very good one, is a complex compromise which requires understanding and some patience in adjusting the way the arm crosses the playing area, how it is biased, and how its tracking weight and angle are adjusted. Every one of these issues is vital to the longevity of your disks. Simple, informed care of the details can help preserve their condition for years of useful life.

The first section deals with how the parts of your audio system interact with other parts and how they best do that. We take up the cleanliness issues early with homemade treatments that work and how to set up your machine properly. We go into technical questions of equalization, and the best stylus tip geometry to choose in buying a new cartridge.

The second section offers two washing machines for disks and a suggested storage cabinet you can build. For those who like to build their own electronics, we offer some electronics projects which could improve how your records sound. If you are interested in pre-LP recordings, we offer a unique preamp that enables you to play these older units realistically. Next are articles on how to do modifications to turntables which allow you to adjust the speed, and thus the pitch, of the music played.

If you are really adventurous, we offer several articles on improving and even building a working tonearm yourself. Many of the vintage tonearms of the past were good candidates for upgrades-like hotrodding a stock car. We close the collection with ways to build a turntable, convert a stock one to belt drive, or build a shock mount for your turntable for quieter operation.

The LP Is Back was designed to offer you everything we thought was useful for those who love and enjoy this older music playback medium. However, one caution please: We have made every effort to update lists of suppliers, sources, and manufacturers. However, some of these may have disappeared, moved, or changed businesses in the 45 years since the first of these articles was written. We have adapted the articles to the best of our ability for today's user, but probably cannot offer more information than is contained in these pages. We suggest you use your imagination and ingenuity, or search the internet for supplies, parts, and materials. -The Editor.

PDF datasheet
Contents page of The LP is Back! by Audio Amateur - code 10077.29 KB
BUY NOW