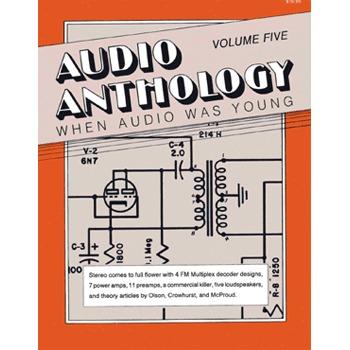 The major theme of this collection of forty-eight articles from Audio magazine, published in 1958-9, is the shift from monophonic to stereo reproduction. Twenty-eight years after Blumlein patented the basic stereo idea, its practical implementation finally took place. Four FM Multiplex adapters are offered by authors Feldman, Day, Coffey and Bernard. The most unusual FM accessory is a commercial eliminator by R.L. Ives. John Rice suggests ways to control radio interference in audio. Seven power amps are included, with stereo's requirements figuring in many of them. The most interesting are those by C.G. McProud, the magazine's prolific editor, a biamp unit with single-channel 20W and 50W amps on one chassis with a variable crossover built in and a new tube amp phase splitter called the Isodyne. No less than eleven stereo control amps are featured, including specialized ones for tape facilities, noise reduction, and some early transistor types. Mostly these offer facilities for the new stereo demands, and some have features which we seldom see today which contemporary users might find helpful. Tape recorders are the interest of three contributors who provide means of controlling two tape machines, a full stereo record/replay amp and a three-channel remote amplifier for location recording. A microphone placement article gives a lot of interesting, and probably erroneous advice on where to put the pickups for recording various instruments. Five loudspeaker designs are included, the most interesting of which is a comer type stereo speaker in a single comer box, designed by McProud. Another design hangs two unusual boxes for single drivers on a wall. One article deals with passive crossover designs for speakers.

Test equipment is not neglected and includes a unique multi-test bench device, a transistor tester from Dick Burwen and suggestions for using steel for shielding. The theory offerings are especially rich and include familiar and outstanding names such as Norman Crowhurst, Harry Olson, Mannie Horowitz, and others. The articles cover amplifier design, definitions of mono, stereo, binaural, decibel, dbms, and volume units as well as how to make output power measurements. McProud briefly discusses phase problems with stereo reproduction. Walter Westphal seriously questions whether the decibel is a fact or a fable.

All in all, the collection is a brilliant, resourceful response to the switch to stereo reproduction. Not only is it a vivid reminder of the early problems of stereo control and tape recording techniques, but offers some designs that are still quite valid today. The speaker offerings are not up to the level of the previous volumes, but are entertaining reading nonetheless.

One reader of the previous four volumes of Audio Anthology said: "They are undoubtedly the dead sea scrolls of audio."