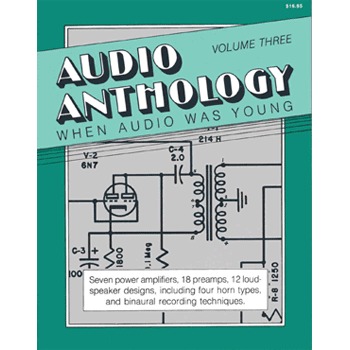 C. G. McProud's third collection of articles taken from the pages of Audio Engineer- ing magazine published between 1952 and 1955 are much more diversified than the previous two volumes. Amplifiers are smaller and simpler, although seven distinct designs are offered, some featuring regulated power supplies. The White Power- tron was a novelty since it came in pairs with built-in filters for bi-amplification. A tetrode design features regulated screen supplies. Preamps are much more prominent in this third volume. Goldmark's 33 1/3 RPM long play disk is becoming more popular and all the problems of non-standard equalization as well as the more obvious need to equalize the signal for lifelike per- formance is in evidence. Edgar Villchur offers an article on tone controls and the first "shelving tone control" is described along with a bass booster, evidence that fixes for loudspeaker shortcomings were being tested. The search for control of the signal also includes a host of knobs for equalization, bandpass filtering as well as the boost and cut which characterized early home audio gear. A "Presence Control" is offered in response to the rediscovery that the ear is a logarithmic device, the Fletcher-Munson curves worrying designers into circuitry altering the signal to make up for inadequate lows. Controls also took on the prob- lems inherent in the noisy mechanics of many of the turntables and changers of the day. In reaction to the ever increasing complexity of some preamp designs, two tiny preamp designs round out a total of 18 different control projects. Two authors explore the mysteries of that still troublesome problem: phono pickup loading, and the joys of the shielded wire's capacitance effect. With the onset of stereo broadcasts, McProud shows readers how to adapt their AM-FM tuners to use both for reception of the earliest stereo broadcasts in AM and FM. And the new stereophonic developments are explained by the late, great James Moir, along with a clear distinction between binaural and stereophonic by RJ. Tinkham of Ampex.

Loudspeakers form the second largest segment of the anthology with 12 articles, four of which are horns, two of them quite large. Two deal with how to damp resonances in cabinets and the remainder are an assortment of corner types. The final article outlines methods of modifying driver cones to lower their resonance by none other than David B. Weems who recently published yet another book on loudspeaker construction.

One curiosity of the volume is the inclusion of two articles by G.B. Houck, who was Julian Hirsch's partner for a number of years. Hirsch's laboratory, where High Fidelity's "Tested in the Home Reports" were done and where Stereo Review's main test reports still originate, bears Houck's name, although Gladden B. Houck has not been active in the lab for at least thirty years.

This equipment was designed to be built by amateurs but McProud kept the "engineering" in his magazine's name and worked diligently and successfully to help found the Audio Engineering Society. These pioneering articles had a profound effect on audio's revitalization in postwar America. They enshrine a standard of innovation and excellence which deserves careful study even now-perhaps most especially now.