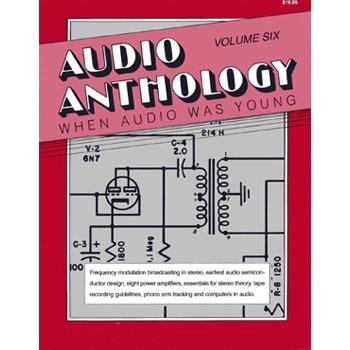 The big news in this sixth Audio Anthology of 38 articles (four of which are two-part) is the advent of the transistor. Appearing in 1962, the articles are taken from the previous two years of Audio (heretofore Audio Engineering) covering 1960-61. The secondary subject, however as in the fifth Anthology is the appearance of a stereophonic version of frequency modulation broadcasts.

The semiconductor is introduced by a general review of principles, providing a very useful overview of what has become the foundation for most of today's electronic circuitry. True to its construction mandate, four articles follow covering a phonograph preamp, a transistorized preamp, a full-blown stereo control and a protection circuit for transistors.

The eight articles covering stereo FM broadcasting were written, as editor McProud points out, by the people who developed the systems proposed to the FCC for implementing this important step in audio development. These include a narrative on how the FCC made its decision, a review of the GE and Time Division systems, followed by Norman Crowhurst on a stereo filter, a FM stereo adaptor from Daniel von Recklinghausen, how to sample signals for FM stereo and how to do FM sweep alignments.

The most popular topic of these early Anthology collections was the power amplifier and this one is no exception. Positive and negative feedback gets a fresh treatment from Charles Boegli, Donald Shirer discusses feedback in low-level circuitry and Arnold Kauder analyzes a universal feedback format for amplifiers. Boegli also offers an anode follower design and R.A. Greiner provides "Another Power Amplifier" design. Voltage regulation for power amps is William Dilley's theme. Related to amplifiers is Alan M. Ferres' article on three alarms when equipment fails. Loudspeakers are represented by a design for a common bass system for stereo, a design chart for bass-reflex enclosures (pre Thiele/Small) and wise words on speaker power issues from Paul Klipsch.

Tape recording's growing importance is reflected in five articles, three of them by Herman Burstein. His series includes landmark work on distortion, maintaining frequency response and controlling signal-to-noise ratio. Tape noise is treated by William Snow and a tape-indexing nomograph is provided by Jerry Lerner. Three general articles on the nature and elements of stereo include "Stereo Misconceptions" by James Cunningham, E.A. Snape on phase issues, and C.H. Malmstedt's suggestion for inexpensive directional sound in "Ersatz Stereo Unlimited." Phonograph technology is treated in W.B. Bernard's excellent "A Graphical Solution to the Tracking Problem" and Niel Malan's "Determination of Tracking Angle in Pickup Arm Design."

Three general theory articles round out the collection. L.B. Dalzell does a tutorial on how to use the then new silicon diode in audio gear and Almus Pruitt tackles with great humor that hoary electronic anomaly: current flow versus electron flow. Then, much like Noah's Biblical "cloud the size of a man's hand" R.G. Buscher does an introductory piece on "Computers in Audio.