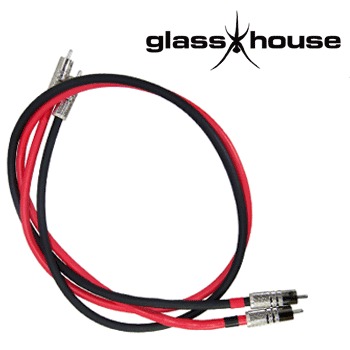 The design philosophy behind the Glasshouse screened interconnect cables is to produce a set of premium quality interconnects using components of the highest quality resulting in a cable with superb sonic properties and excellent extraneous noise rejection. These cables are a development of the Glasshouse Interconnect Cables No.2, using three strands of Mundorf`s 99% silver / 1% gold 0.5mm single core wire, sheathed in PTFE as the main signal carrier. However, these cables are also fully screened and terminated with Cardas SLVR SS silver plated phono plugs.

In order to make up the interconnects, three strands of the Mundorf cable needs to be weaved together to form the signal conductors. There are various schools of thought on what method should be used: twisting together to form a rope, various methods of weaving or just leaving the wires loose to be threaded into screening and sleeving. Leaving the wires loose will result in a random layout within the wire which may produce undesirable effects. Twisting the wires together will tend to increase the inductance of the wire and will shorten the resultant cable by a small percentage, from experience. Weaving the three strands together in the form of a plait results in no significant change to the length and minimises the cable inductance. It is also relatively easy to do by hand. This was the method chosen for these interconnects.

Before attempting any comparative listening tests, it is very important to burn-in the cables for between 70 and 100 hours. However, the first 10 hours makes a huge difference to the sound, in my experience, and then continues to improve in a more gradual fashion. The signal flow in a cable can be compromised by a number of factors such as resistance, skin effect and capacitance, inductance, RFI, and dielectric material. All of these factors can affect the transfer of complex musical signals. Burning in a conductor affects the crystalline structure and allows many of these variables to settle down which has a positive effect on sound quality. I achieved this by feeding the cables from a radio source with the power amplifiers switched off, but HiFiCollective can provide a cable burning service if desired.

For my tests, I was using a set of 'standard' high purity copper coaxial cables that had been in use for some time. If you are tempted, like I was, to test the cables immediately after construction, you may well be disappointed. In comparison to my fully run-in cables, the new ones sounded a bit harsh in the top end, although the bass was more extended from the onset. One of the problems I had experienced with my copper coaxial cables and others I have used was interference from my BlackBerry/mobile phone if it was in the same room as my Hi-Fi. Whenever it connected to the network to update emails, etc., I could hear a loud buzzing through my system. With the Glasshouse cables, this was virtually eliminated - a very good start!

However, after the first 10 hours of burn-in, it was a very different story! The top end became clearer and less harsh. The midrange re-appeared from the shadows and the already extended bass became tighter and better controlled. The overall effect when compared with the copper co-ax was that musical instruments sounded more real. This was best illustrated with my 1979 vinyl recording of Beethoven's Piano Concerto No. 5, "The Emperor", on Decca Digital Master SXDL 7503. The piano, one of the hardest instruments to record and reproduce, became more alive in my sitting room.

On the lighter side, I am fortunate to have access to a large amount of music used by the BBC that accompanied the test card and used as intermission music between schools programmes and 'rain stopped play' intervals in the 60s, 70s and 80s. Most of this music was recorded using full orchestras or small groups of individual musicians in superb quality. Alas, such recordings would be prohibitively expensive to make today. When transcribed onto CD from the original master tapes by highly skilled people who understand the music of the time and using the latest technology, the results are recordings of unsurpassed quality without any of the modern shortcuts using synthesised sound. These recordings make superb test recordings and I could write pages detailing the differences, both subtle and dramatic, on every instrument that the new cables reveal over my old copper cables. However, I can summarise them by saying that the new cables add a new dimension of realism, detail, clarity and presence to every individual instrument, whether in a small ensemble or a large orchestra. In conclusion, do not underestimate the difference a set of high quality interconnect cables can have on the sound of your system. It is also vitally important to burn-in the cables before attempting comparative testing. These cables are a real bargain as, being a kit, you are saving money as you are only purchasing the composite components. The mark up of the components is a fraction of the mark up of a manufactured and fully burnt-in cable, so it is easy to see why some interconnects can cost thousands of pounds. You will not be disappointed in the Glasshouse screened interconnect cables - treat yourself!